The Pituitary Gland ­ a “Master Gland” 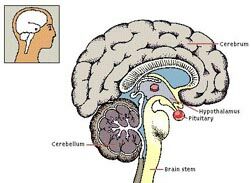 If the endocrine system, or ductless glandular system can be compared to an orchestra, then the pituitary, as one source describes it, plays first violin.
This pea-sized gland is so important to the body that it is nested in a tiny cavity at the base of the skull in the sphenoid bone, and attached to the brain by a stalk of tissue.
Demonstrative of the adage “Good things come in small packages” the pituitary is divided into ante and posterior lobes, each of which secretes several hormones that control the function of other endocrine glands and organs throughout the body.
Because the pituitary is so involved in not only reproduction but in milk production in new moms, this gland tends to be slightly larger in women than in men.


Supporting the Fountain of Youth
(By Steven Horne)

Balancing Pituitary Hormones to retard Aging and Improve Health.
Science is confirming that hormonal imbalances are at the root of the aging process. As we grow older, levels of certain key hormones such as testosterone, estrogen, melatonin, DHEA and human growth hormone (HGH) decline. While it may seem tempting at first to buy into the idea that all we need to do is supplement these hormones and all will be well, the answer isn't quite that simple. Consider the problems science has uncovered with estrogen replacement therapy for postmenopausal women. The estrogen supplements once thought to perform miracles for aging women have now been shown to increase cancer risk.

The fact is, the decline in hormones and the hormonal miscommunication are symptoms of the deterioration of our health due to nutritional imbalances and other lifestyle factors. Hormones require nutrients for synthesis. Replacing hormones is not going to supply these nutrients. Likewise, there is a growing list of environmental toxins known to disrupt endocrine function. Again, replacing hormones isn't going to get rid of these chemicals.

Food for the Master Gland to do its job properly, the pituitary needs nutrients.
Pituitary hormones are amine hormones, which means they are based on amino acids as primary building blocks. Specific minerals and vitamins are also needed to synthesize these hormones. If these nutrients are lacking the pituitary will not function properly and neither will the rest of the glandular system. While many people are consuming protein in their diets, most of the protein they are consuming is devitalized protein -protein that has had its amino acids denatured by cooking at high temperatures.

Many herbalists have successfully used Alfalfa for a wide variety of pituitary related problems. The discovery that alfalfa aided the pituitary was made by LaDean Griffin, an herbalist and naturopath, who was searching for the answer to a serious pituitary condition in one of her children. She was able to stabilize her daughter's life-threatening pituitary disorder with 40 Alfalfa tablets per day. The combination Herbal Trace Minerals is another pituitary balancing supplement. It combines alfalfa with two other mineral rich herbs, kelp and dandelion.

One of the most amazing facts about the pituitary gland is that the two lobes develop from completely different embryologic tissues and function in very different ways. The anterior lobe, or adenohypophysis, evolves from epithelial cells deriving from the roof of the pharynx and is most noted for the variety and activity of its hormones. This portion of the pituitary is completely endocrine in function; that is, its hormones are dumped directly into the bloodstream for dissemination to other glands or tissues. The hormones produced by the anterior lobe are quite varied in both target and function

* Adrenocorticotropic hormone (ACTH) targets the cortex or outer layer of the adrenal gland, stimulating secretion of hydrocortisone from that organ. ACTH also takes part in the body’s stress response.

* Growth hormone, occasionally called somatotropic hormone, functions throughout the body as an essential factor in growth of the height and density of the bones.

* Follicle-stimulating hormone
, or FSH, targets the sex glands of both genders, stimulating the maturation of eggs in the female and sperm cells in the male.

* Leutenizing hormone, or LH, also functions in both genders, stimulating ovulation in the female and production of tes­tosterone in males.

* Thyroid‑stimulating hormone, or TSH, targets the thyroid and triggers secretion of its hormones.

So here's this tiny little organ with seven hormones capable of influencing the entire body. But how does the pituitary know when to secrete a particular hormone and how much? Or when to send the cut‑off signal? The adenohypophysis has only endocrine function; it has no direct connection to the rest of the body. Therefore it's up to the controlling hypothalamus to send chemical messengers via the bloodstream through the pituitary stalk to the anterior lobe. Once these specific messengers reach the anterior pituitary, it immediately secretes the appropriate hormone into the blood stream. It is therefore quite obvious that anything that impairs blood flow, either generally or especially into and through the pituitary stalk, radically impairs the function of this all‑important gland.

The posterior lobe of the pituitary may seem less important; after all, it (only!) secretes two hormones. As the term neurohypophysis implies, it is embryologically developed from nerve tissue. This posterior lobe contains nerve endings from the hypothalamus, which cause production or suppression of hormones. Again, the communication with the hypothalamus is via that vital pituitary stalk.

* Antidiuretic hormone or ADH is secreted here in the posterior lobe. This hormone controls the balance of water in the body, and works directly with the kidneys.

* Oxytocin is the hormone that produces contractions of the uterus, thrusting the baby out of its‑warm nest and into the world.

When we talk about hormone production, it's difficult to realize the minute amounts of chemical needed to produce a response. Maintaining the appropriate amounts of hormones to keep the body functioning at peak level is an enormous responsibility, and the potential for something to go wrong is vast. Luckily, the human body has redundant failsafe systems and pre-computer subprograms of “if-then” that help determine how much of what hormone gets secreted when. For example, the hypothalamus receives input that the body needs thyroid hormones, so it sends its chemical messenger to the pituitary gland, which produces TSH.  This is secreted into the bloodstream where it circulates to the thyroid gland.  Upon reaching the thyroid,  TSH instructs that organ to increase production of whichever hormones are deficient. When the level of thyroid hormones in the blood reaches optimal levels, the sensors in the hypothalamus send signals to the pituitary to stop producing TSH. And so it goes for each of the endocrine hormones. In the case of growth hormone, the process of production is much longer term.

As puberty begins and the gonads start producing their hormones, the hypothalamus receives the cut-off signal, and notifies the pituitary to decrease and then stop producing growth hormone. One source describes the action of gonadal sex hormones as "neutralizing" growth hormone.

There is no way the human organism can survive without the pituitary gland. The number and scope of actions of the multiple hormones involve the entire body. A normally functioning pituitary keeps the body in harmony and all systems working as they are designed to do. Malfunction, whether from either too much or too little hormone, has enormous consequence for the body both in structure and in the functioning of other organs. The pituitary's interactive ability and its capacity to respond rapidly as needed yet maintain prolonged stimulus for the long human growth period is truly amazing. It's not called the master gland for nothing!

What Is the Endocrine System?
(By TeensHealth)

Although we rarely think about the endocrine system, it influences almost every cell, organ, and function of our bodies. The endocrine system is instrumental in regulating mood, growth and development, tissue function, metabolism, sexual function and reproductive processes.

The foundations of the endocrine system are the hormones and glands. As the body's chemical messengers, hormones transfer information and instructions from one set of cells to another. Many different hormones move through the bloodstream, but each type of hormone is designed to affect only certain cells.

A "gland" is a group of cells that produces and secretes, or gives off, chemicals. A gland selects and removes materials from the blood, processes them, and secretes the finished chemical product for use somewhere in the body.

Some types of glands release their secretions in specific areas. For instance, exocrine glands, such as the sweat and salivary glands, release secretions in the skin or inside the mouth. Endocrine glands, on the other hand, release more than 20 major hormones directly into the bloodstream where they can be transported to cells in other parts of the body.

The major glands that make up the human endocrine system include the: