What is the lymphatic system?

Lymph is a clear fluid that circulates around the body tissues. It contains a high number of lymphocytes (white blood cells). Plasma leaks out of the capillaries to surround and bathe the body tissues. This then drains into the lymph vessels. The fluid, now called lymph, then flows through the lymphatic system to the biggest lymph vessel - the thoracic duct. The thoracic duct then empties back into the blood circulation.

Lymph glands
Along the lymph vessels are small bean-shaped lymph glands or 'nodes'. You can probably feel some of your lymph nodes.  There are lymph nodes:

There are also lymph nodes that you cannot feel in

Other organs that are part of the lymphatic system

The lymphatic system includes other body organs. These are the Spleen, Thymus, Tonsils and Adenoids.
The spleen is under your ribs on the left side of your body. The spleen works as a filter of lymph fluid.
The thymus is a small gland under your breast bone. The thymus helps to produce white blood cells.  It is usually most active in teenagers and shrinks in adulthood.
The tonsils are two glands in the back of your throat. The tonsils and adenoids (also called the 'nasopharyngeal' tonsils) help to protect the entrance to the digestive system and the lungs from bacteria and viruses.
The adenoids are at the back of your nose, where it meets the back of your throat.

What does the lymphatic system do?

The lymphatic system does three main jobs in the body. It... 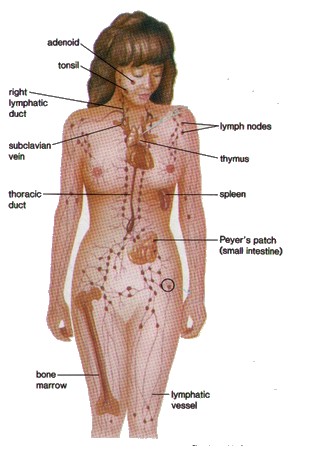 Filtering lymph
This is the job of the spleen. It filters the lymph to take out all the old worn out red blood cells. These are destroyed and replaced by new red blood cells that have been made in the bone marrow.

Fighting infection
When people say "I'm not well, my glands are up" they are really saying they have swollen lymph nodes because they have an infection. The lymphatic system helps fight infection in many ways such as:
* Helping to make special white blood cells (lymphocytes) that produce antibodies
* Having other blood cells called macrophages inside the lymph nodes which swallow up and kill any foreign particles, for example germs.

This function of the lymphatic system is really part of the immune system.

B cells and T cells
The white blood cells involved in the acquired immune response are called 'lymphocytes'. There are two main types of lymphocytes - B cells and T cells. B and T lymphocytes are made in the bone marrow, like the other blood cells. They have to fully mature before they can help in the immune response. B cells mature in the bone marrow. But the immature T cells travel through the blood stream to the thymus gland where they become fully developed.

What do B cells do?

B cells react against invading bacteria or viruses by making proteins called antibodies. The antibody made is different for each different bug. The antibody locks onto the surface of the invading bacteria or virus. The invader is then marked with the antibody so that the body knows it is dangerous and it can be killed off. The B cells are part of the memory of the immune system. The next time the same bug tries to invade, the B cells that make the right antibody are ready for it. They are able to make their antibody more quickly than the first time the bug invaded.

What do T cells do?
There are different kinds of T cells called:
* Helper T cells
* Killer T cells

The helper T cells stimulate the B cells to make antibodies, and help killer cells develop. Killer T cells kill the body's own cells that have been invaded by the viruses or bacteria. This prevents the bug from reproducing in the cell and then infecting other cells. Once they are fully mature, the B and T cells travel to the spleen and nodes ready to fight infection.