THE HEALTH OF A CHILD

"Children are subjected to the rewards and penalties of the diet and lifestyles of their parents"
Dr. Ted Morter Jr. M.D. 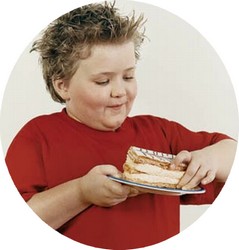 According to The Wall Street Journal: "For a growing number of children, three square meals a day have given way to all day grazing." Parents, in part, foster their children's deplorable snacking habits as a convenient mean to buy peace at home after a busy day, or at church! A fourth of this nation's children are overweight".

Numerous Public schools are now checking the level of cholesterol with kids not even 15 year old!

Arthritis, diabetes, cancer, heart related diseases, gout, infertility, migraines, sinuses, bladder related problems as well as many other diseases or symptoms are, for the most part, directly linked to a disastrous diet. Most of these diseases could be avoided when one understands the direct connection between the food one eats and these diseases.

Why is SUGAR bad for us?

Sugar and complex carbohydrates, both give the body plenty of energy, with a major difference between these two suppliers!

The ONLY role of food is to feed the body of useful nutrients for its proper functions. Processed food is not understood by one's body, contributes very little (if anything at all) to one's wellbeing but will exhaust body systems.

Sugar contribution is null except for the fact that in the long run sugar will affect the kidneys and the pancreas, it also increases the acid level of one's body. Too much acidity leads to joint pains, arthritis and many other discomforts later on in life.

Sugar, in our opinion, might be linked to hyperactivity sometimes called "attention deficit disorders" (ADD).

Consequently it might be wise to do the following:
Throw away all the food in your house that list ANY of the following:
* simple sugars, syrups (HFCS).
And... while you are at it:
* white flours
* saturated fats and trans fats.

Cow's milk is NOT the best source of calcium. Sound scientific evidence shows that the proteins and fat in milk are the cause of many common illnesses. It has been shown that asthma, anemia (iron deficiency) and many ALLERGIES are linked to or made worse by dairy products.

What about calcium for one's bones?

Many people around the world grow up healthy without ever drinking cow's milk. Plenty of plants are calcium rich: broccoli, sweet potatoes, baked beans, figs, seeds, nuts and nut butter like almond and cashew etc.. Calcium fortified orange juice (non processed) is as rich in calcium than cow's milk without the cholesterol and saturated fat.

A closer look at "soft Drinks"

Most soft drinks contain caffeine, a stimulant that gives people a "lift", but a few hours later, most people will need another similar drink for a newly needed "lift". (Addiction)

The most popular of these drinks contain a colorant, a cancer causing suspect. It is sometimes referred to as "polyethylene glycol". Glycol is also used as anti-freeze in automobiles. The bubbles and fizz, phosphoric acid and carbon dioxide (a waste product exhaled by humans and automobiles), can damage the intestinal tract.

The phosphorus in the acid, upsets the body's calcium-phosphorus ratio and dissolves calcium off the bones. (Long term effect: osteoporosis). It also fight the (good) hydrochloric acid in human stomach rendering it ineffective (digestion and assimilation problems).

A word about "Salt"

It should be consumed with caution. It takes a great deal of effort for the kidneys to evacuate salt and therefore the body may retain fluid to dilute it and make the job easier for these organs. This might explain, in part, cellulite and water retention.

Take a hamburger, a hot dog, a piece of ham - put each piece in a closed box and expose that box to a level of heat similar to that inside of one's body. Twelve hours later, open the cover and take a good look inside each box. You will see "parasites" at work. What does that tell us?

Parasites did not come from the box or from the outside. Surely will you say, but once the hot dog has passed the stomach all parasites are dead. True, only if one's stomach has enough hydrochloric acid to do its job or/and that this person did not drink plenty of iced liquid while eating. Drinking during meals reduces the efficiency of HCL.

When we are born, the Creator, put "friendly bacteria" in our bodies to make sure that unfriendly ones would be taken care of. Modern science came up with a miracle drug called antibiotics. It is widely used all over the world to treat health problems from children runny noses, sinuses problems, earaches to measles and all infections.
Problem: if you do not give that child a dose of "friendly bacteria" such as bifidophilus, the friendly bacteria will be killed by the drugs and the parasites will have a feast!

According to Alternative Medicine - The definitive Guide - Compiled by the Burton Goldberg Group pg. 782, "Three out of five Americans are or will be infected by some sort of parasites at some point in their lives." Detecting parasites is difficult and Random Stool Examination, a standard test, is proven insufficient and unreliable.


One has a limited "natural" reserve of organic minerals and enzymes.
Our body is so perfectly put together that it will immediately respond to every good nutrients it receives. Healthy food is composed of ingredients that nourishe and serve the body. It gives it plenty of good health.
Food plays its full role when it brings along the ENZYMES for its own digestion AND assimilation. Enzymes are essential for the body's physiological functions. Enzymes are the dividing force behind all biochemical processes in the body.

In America, a weakened immune system is mainly due to:

Minerals
Minerals must be supplied on a daily basis to maintain and regulate body functions such as:
Digesting, normalizing heart beat, improving brain function and one's mental abilities, fighting fatigue, increasing energy, aiding the metabolic process and balancing the pH of the body by neutralizing acidity.

Our body has a "natural reserve" of minerals and enzymes which is called upon too often if one does not eat enough raw food, fruit and so on to replenish that reserve. A human body CANNOT function properly without enough minerals, enzymes, vitamins and essential amino acids.

The "love" cycle
(something to think about...)


When we exalt our children, they start to rebel against the role into which they have been cast-as love generators and love objects. With increasing resentment they come to see that what their parents regard as love is in reality a kind of smothering, possessive control, a vicarious reliving or ego projection.

Or possibly the children do not even know what it is, except that they dread going home and feel like they are suffocating while they are there. We all know about the alarming number of teenagers who are running away from so-called nice homes, because their parents are so selfloving that they do not have any time for them. But what does not make the headlines is the equally large number of teenagers who are fleeing homes where they get too much of the wrong kind of attention-idolatrous attention. Occasionally, some children are willing to play the game for the sake of their own ego gratification, even into their middle years. And for a while the "love" cycle appears to be working.

MOTHERS: THE PRIORITY IS YOURSELF!

Women are always so busy taking care of everyone else's health that they forget about their own. Taking care of yourself... a priority? Difficult to wrap your mind around that concept. Right?

Taking time for yourself? When? How? Where?
You must ask yourself, what happens if you don't? You have to love yourself better. It is not easy. Yet it is imperative, for the sake of your children!

What if you get sick? What if, God forbids, a long term disease takes over your body? Who, then, will replace you as a mother?
YOU ARE THE PRIORITY.
Keeping yourself in good health is your priority.