People often ask "Can you explain what you do?" or "How does it work?" or "I feel so much better but I don't know how to explain bio-energy to my friends". It was around 1999 when I realized I could do good to people by simply touching them! I was amazed at what I had discovered and very thankful for such a gift.

A friend of mine loaned me some books to read and I discovered a world I knew very little about. I also realized that such a healing gift is to be used with humility, the practitioner being only the instrument of a higher power. In the very early days of my discovered gift a young woman came to see me. She could barely walk and was suffering with pain all over her body. I asked her to sit down and to let me work on her. I barely knew, at the time, what I was doing but felt inspired to simply follow my intuition. So I did.
The next morning I received a call from this lady and to my surprise she asked me "who on earth are you?".
Why do you ask? I replied.
Because for the first time, and after many years of suffering, I had a deep sleep and I feel no pain at all, she said!

More extraordinary "healing events" are still happening. I truly believe in using this gift with humility, love, understanding and compassion.

So... what is Energy Therapy?
Bio-energy is a safe, non-invasive and highly effective form of energy treatment. In a typical session, the primary aim is to locate any energy disturbances or blockages in the body. It is then simply a case of clearing these interruptions to restore the natural flow of energy to the bio-energy field. This allows the body's self healing mechanisms to kick in. Centers of energy, also known as Chakras are located at specific places in our bodies. Those centers act as energy receivers, generators and transformers, helping to funnel energy at the required frequency to individual organs in order to keep them healthy. When the energy flowing around the seven energy centers [Chakras] becomes blocked, illness and disease will prevail. The feeling of well-being normally related with good health will be reduced considerably. These blockages can be caused through sudden physical, mental, emotional trauma and poor diet or over a period of time through established mental patterns of stress, anxiety and fear.

Whatever the cause, the body’s natural instinct to heal itself using its healing energy is disabled until such time as it is unblocked. Exchange of energy at such a deep level has a profoundly relaxing effect on the recipient and can bring the body to a more balanced and relaxed state. Through years of practicing Bio-Energy Therapy I have found that it is a wonderful way of relieving pain and allowing healing to happen on a range of ailments.

But what is "energy"?
The world is made of energy. It is all around us. You and I are energy!
What happens when you walk into a room full of people who are laughing and light-hearted? Your mood magically lifts to match theirs. Even our brain waves follow this physics principle. It happens when people are subjected to certain stimulus and their brain frequencies shift to calmer states. We simply "are" energy. Energy can be felt -if you pay attention- when you meet someone for the first time. You can either have: a positive "feeling" about that person or a negative one or no feeling at all. Feeling is energy! Some people have received a very special gift, a divine energy gift. That energy flows through the practitioner's body down their arms, and out through their hands where it flows into the client's body. A common method of doing energy healing is for the practitioner to place their hands on a client. The practitioner opens their crown chakra (energy center) and allows him/herself to be a channel for divine universal energy.

Depending on the client's receptivity and willingness to release blocked energy, this divine energy will replace/heal/remove one's blocked energy. This is an oversimplification of the concept, but it is an accurate description. For a session to work as it should it is important for the client to be totally opened to such method.
Often a first time client is not sure what "magic" we do here. He only knows it works!

Do you feel anything?
When I am the "practitioner" most of my clients do feel intense "heat" or "cold" or "tingling" or even like a "draft" wherever my hand detect a "weak " spot on their body. I then explain that most probably toxins are broken down or whatever should not be there is affected by my own energy. It then creates some sort of feeling of heat or cold as explained above.
I have yet to have a client who did not experience a very positive "feeling" after a session such as far more relaxed, lightedness, deep happiness and if pain was involved: no more pain!

Science is catching up
As explained on this site, science is catching up with the energy healing community. Auras are an actual scientific concept that has been measured, studied, and proven. They are just going by another name in scientific circles. The term that science has deemed acceptable is the human energy fields. We are still in the process of discovering more about them, and it's a wonderful time of research, because each step forward that we take in our knowledge of energy field (aura) is one more step towards scientifically validating what all the healers have known about for millennia.

So What is the Human Energy Field and how was it discovered?
It started back in 1903 around the same time that Dr. Hans Berger was theorizing about human brain wave frequencies. The work by Dr. Berger on the electrical frequencies of the brain and by Dr. Einthoven on the electrical frequencies of the heart, led to extensive research by the scientific community. It was then proven that both the brain and the heart had an electrical field and that it could be measured. Since that time scientific researchers have used the EEG and the EKG to measure the human electrical field of the heart and brain. The EEG in particular has been used extensively in research to show that the brain wave frequencies of people receiving energy work are shifted into lower states. The EEG and the EKG can study the electrical field of the human body. Due to a well-established physics principle, that study also includes the magnetic field. The principle is called Ampere's Law and was named after it's discoverer, a French physicist named Andre Ampere in 1827. A simple definition of the principle is that if there is an electrical current, there will be a corresponding magnetic current of the same size. How does all this tie in to the concept of energy healing and the human energy field?

Researchers have discovered that as certain energy practitioners do Energy Healing their electrical and magnetic fields are increased significantly enough to be recorded. James Oshman, a scientist, wrote about such studies in an article titled Science and the Human Energy Field. In that article he discussed research findings of Dr. John Zimmerman from the 1980's at the University of Colorado of Medicine in Denver. Dr. Zimmerman measured the readings of hands on healing with a SQUID magnetometer, a machine more advanced than the EEG. In Oshman's words, "Dr. Zimmerman tested the biomagnetic field of a Therapeutic Touch practitioner (a method of hands on healing) using the SQUID. He had the practitioner and a patient enter a magnetically shielded chamber. Dr. Zimmerman measured the biomagnetic field of the practitioner's hand both in a state of doing nothing and in a state of directing healing energy into the patient." He continues, "The measurement of the practitioner's hand while doing the healing work was much, much higher than the measurement of the practitioner's hand in a passive mode. What this research proved was that the energy worker's hand produced a much larger biomagnetic field (aura) when channeling healing energy. The Therapeutic Touch signal pulsed at a variable frequency, ranging from 0.3 to 30 Hz, with most of the activity in the range of 7 to 8 Hz." Zimmerman and Seto's findings are astounding.

Proof that practiced energy healing practitioners have a stronger, pulsing frequency of energy than non-practitioners. The frequency is another point of interest. 7-10 Hz is the Hz range of the Theta and Alpha brain wave frequencies. The same frequencies that have been noted to promote physical healing. There are countless case studies and anecdotal research verifying the effects of energy healing sessions (read some of the testimonials we have received). In almost every case there is a reduction of negative emotions, symptoms, attitudes, and pain. Results are perceived on the physical, spiritual, emotional, and mental states. 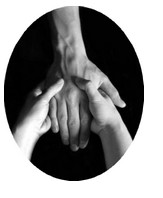 Are we really offering free energy sessions? Yes!
To all children under the age of 6 who have been diagnosed with a terminal disease. Why are we offering free local or long distance healing to these children? Because of the gift we have been blessed with! We believe in giving back and in sharing what we know, what we have learned from experience.

How does it work?
Call our office, give us the name and the date of birth of the child. We shall set aside a date and a time for an energy session in our office or long distance. All we need from you is a recent digital picture of the child.

Is there a charge?
None at all. Is there a catch? Absolutely not. We are simply sharing a gift of love, understanding and compassion.